This vox by mike on behalf of new-yorkers is endorsed by 0 of them and denied by 0. 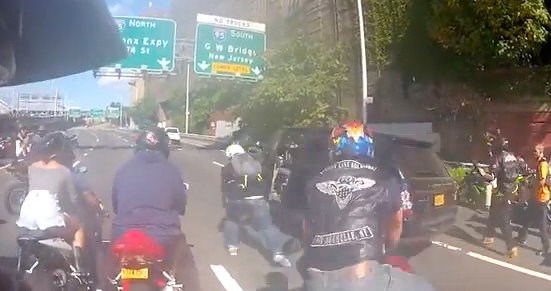 No sympathy for the NYC motorcycle mob. The video (referenced below) shows them to be an aggressive, reckless and threatening mob of immature "stunt" motorcycle Neanderthals that intimidated and ultimately beat a man in front of his wife and 2 year old. Barring some new evidence, it's clear they instigated the confrontation, and deserve to be punished. The man was defending his family from a life-threatening situation (they slashed his tires when he stopped after he collided with a rider, who's license had previously been revoked and who appeared intent on being hit), and therefore was within his rights to act as he did. Many motorcyclists are law-abiding courteous users of public roads. But some are obnoxious idiots, especially when in a pack, who routinely flout traffic laws and/or intentionally disturb the peace of residential neighborhoods. Those guys don't deserve the privilege of a driver's license.

Range Rover VS Biker Gang Here's Video of a Violent High-Speed Motorcycle Chase in New York City Feel like watching a six-minute video of a motorcycle gang chasing a black SUV through...
Bloc Replies▶ • Member Comments • Respondents • Share Share • Flag
Discussion among the new-yorkers.
No comments have been added yet.
Every voice counts. About Blog Terms & Privacy © 2023 Blocvox LLC